Ninety percent of the world’s malaria occurs in African countries. From advocates and activists, to scientists, health workers and those in between, this category recognizes outstanding individuals who use social media to effectively engage their peers and other stakeholders, and showcase the needs and achievements in the fight against malaria in the region. 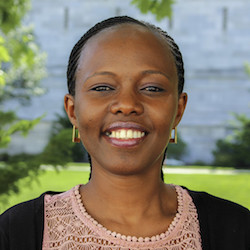 As the head of the National Malaria Control Program in Rwanda, Dr. Karema is at the forefront of research, advocacy and community outreach to fight malaria nationally and throughout the region. With the NMCP, she designed and led the impact evaluation of malaria control interventions. This effort revealed significant reduction in malaria mortality in Rwanda. Her work, along with others, has brought good news to Rwanda: More than 83% of Rwandan households now have insecticide treated mosquito nets, and 99% of malaria cases are treated with effective anti-malarials within 24 hours of symptom onset.

With a sizable social media presence, she shares the lessons and victories from Rwanda around the world. Through her active Twitter account, followers are regularly informed of relevant news and opinions, along with the work of NMCP. Corine is also involved in several regional and international malaria-related committees, technical groups, and networks. She is the author or coauthor of many publications detailing research from her malaria work.

Dr. Karema is a strong advocate for social media as an essential tool in this effort, as testified to in recent Tweets:

Check out Corine's interview with Tim France below, as well as the amazing custom illustration (click image for larger version):

Since 2003, UNDP has partnered with the Global Fund to Fight AIDS, Tuberculosis and Malaria to support the implementation of HIV, tuberculosis and malaria programmes in low- and middle-income countries. UNDP acts as an interim principal recipient of grants in crisis or post-crisis situations, strengthening the capacity of national counterparts to administer the programmes in the long-term.