Most Latin American countries have met the Millennium Development Goal for 2015 of reducing the number of diagnosed cases by 75%, and six countries have entered the pre-elimination phase. The progress is promising and elimination is within reach with the combined efforts of advocates and activists, researchers, health workers and those in between. This category award recognizes the individuals who use social media most effectively to promote progress towards malaria elimination and showcase the work that is happening to achieve this goal. 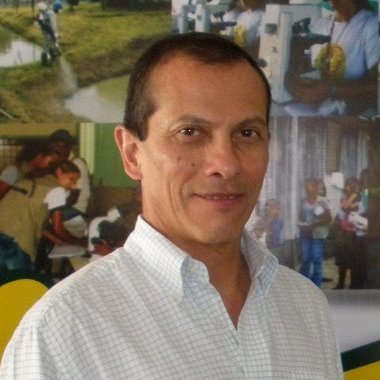 Jaime is the coordinator of the Amazon Malaria Initiative, an effort supporting national malaria control programs in eleven countries. Jaime Chang has worked with USAID for over fifteen years as a project management and public health specialist. Most of his work has been in Peru and South America, but he has also worked in Mozambique and Zambia. Dr. Chang trained as a physician and obtained his Masters in Public Health at the Universidad Peruana Cayetano Heredia and has an MSc in Community Health in Developing Countries from the London School of Hygiene and Tropical Medicine.

With decades of experience in health care, health systems, and tropical disease research, Dr. Chang has fought malaria in both his native Peru and internationally. His work with the Amazon Malaria Initiative is marked by a collaborative, knowledge-sharing approach. AMI has a strong social media presence, on both Facebook and Twitter, including a Facebook discussion group, of which Dr. Chang is an active member. The AMI discussion group includes hundreds of members, sharing information about malaria in Latin America, along with dialogue about elimination in both Spanish and English.

Check out Jaime's interview with Tim France below, as well as the amazing custom illustration (click image for larger version):

The Barcelona Institute for Global Health (ISGlobal) is devoted to improving global health and promoting health equity through excellence in research, training, policy and development. ISGlobal has a longstanding tradition in multidisciplinary approaches to malaria and hosts an initiative specifically devoted to malaria elimination. In 2013, in recognition of its trajectory in this field, it was designated a World Health Organisation (WHO) Collaborating Centre for Malaria Control, Elimination and Eradication.